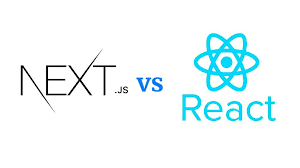 Next js vs react js

In the modern world, having one’s own website is a must for any business and even for personal needs. However, the biggest concern for every developer or individual is what technology or framework to employ. Every website owner considers the “User Experience” of their website to be the most crucial aspect to consider while building a complete web application.

Both the JavaScript language and its ecosystem are dynamic. JavaScript problems are being solved in new and inventive ways every day, which has led to the development of tools. Two of the most widely used tools among front-end web developers are React and Next.js.

They’re enjoyable to work with and are the universally accepted tools for creating user interfaces (UI), which have shaped our internet experience. However, React has become more popular as the most widely used library or framework, making it the default initial framework for new developers in the JavaScript ecosystem—though, come to think of it, Next. It uses the same React library as js. What distinguishes them, and why?

What is NextJS and what applications can we create with it?

On top of the React library, NextJS is a react framework that is open-source. Vercel is the creator of it. React apps may be quickly and easily optimised for search engines using the NextJS framework. Client-side rendering of a standard React application begins with an HTML page shell devoid of any rendered content, from which the browser extracts the JS file, which is made up of ReactJS files, to display the content on the webpage.

With its capabilities like server-side rendering, route pre-fetching, smart bundling, etc., NextJS enables you to build production-ready apps and gives you the finest experience.

NextJS is used by organisations like Vercel, Netflix, Hulu, Expo, and others for their apps. It now encourages you to use Next to create your web applications. Here are some aspects of the NextJS that you may find useful:

Landing Pages: This might be an excellent alternative if you’re trying to construct landing pages for your websites. Marketers love them since they are the first page visitors to your website view.

Website promotion:If you’re creating a website for marketing, NextJS is the best option because users occasionally open websites on slower devices, and this causes the website to load more quickly because it is being displayed on the server.

What is ReactJS and what applications can we create with it?

React JS, a JavaScript framework created by Facebook for creating user interfaces, was declared open-source in 2013. It is used to easily construct interactive user interfaces with components that just perform two functions: rendering the display after receiving input data. The output might range from a simple “Hello World” print to intricate user interfaces that make use of rich data.

For enterprise-grade mobile applications, React is one of the most widely used front-end development libraries today, along with Redux, React Native, and other frameworks. Another frequently used React-based tool for managing component behaviour and logic is React Hooks. Because they are declarative and scalable, React components are simple to utilise and apply to complicated structures.

It is employed to create dynamic, SEO-friendly websites, single-page applications, mobile apps, dashboards, and visualisation tools. React is used to create some of the most well-known websites and applications that we use every day, including Facebook, Netflix, Reddit, BBC.com, Airbnb, etc.

Benefits of Next JS

These are some of the primary motives behind developers’ use of Next.js.

Compared to React and other React-compatible frameworks, Next.js is easier to develop. This strategy simply needs developers to build the page and link to the component in the header, which results in less code, better readability, and better project management..

Rapid rendering – By refreshing the page, each update to the file is immediately apparent. It is simpler to follow modifications as they take place because the component is immediately displayed.

Built-in CSS: Next.Js allows you to import CSS styles from a JavaScript file for inline use, which speeds up rendering.

SEO – It’s simple to add titles and keywords for each page if you want to improve your SEO. Just add them to every page using the featured Head component.

Speed – Server-side Rendering and Static Generation, which offer a more intelligent approach to manage data, make applications created with Next.js quick. The speed of server-side rendering depends on how quickly the server responds to queries.

Next.js leverages plugins like Babel, which makes it very flexible, and is simple to deploy. Deployment is highly straightforward and easy by design, enabling the speedy activation of apps.

API compatibility – Third-party APIs can broaden the possibilities for your project, and Next.js connects to them quickly, making it easier to build custom API routes.

Comparison between React and Next.js

In order to assist you choose which tool to use based on your needs, we will compare two of the most popular front-end development tools in the JavaScript ecosystem in this section.

What Next.js does is provide React structure and more advanced rendering tools. It functions on top of React since it calls itself “The React Framework for Production,” as was previously stated. As a result, it uses several tools and resources currently utilised by React, such as Redux or Hooks, to function as an engine for React’s capabilities.

You’ll find Next.js simple to learn if you’re already familiar with React. This is so because Next.js is based on React and has all of React’s advantages (such being component-based and declarative) in addition to its own features and functionality.

However, React has a low learning difficulty level. Resources have been produced in significant quantities throughout time; as a result, the learning curve is not excessively steep.

Because static web pages are pre-rendered on construction, cached, and distributed through a CDN, static site generators like Next js often provide the quickest loading static web sites. Another quick rendering technique that it supports is server-side rendering.

React employs client-side rendering, which is regarded as being quite sluggish, but it can be set up to use additional rendering techniques as well. The amount of effort required to make it function is the sole distinction.

React has strong opinions about the best ways to arrange its code, which makes it challenging to integrate it with other frameworks that follow other patterns.

Additionally, React doesn’t offer many built-in functionality, necessitating the usage of third-party libraries or the creation of everything from scratch. This might take a lot of time and make your project more complicated. The trade-off is that React is simple to understand and use and speeds up development.

React might thus, depending on your needs, be a viable solution for your project even if it may not be extremely customizable.

One advantage of utilising Next.js is that practically everything can be customised using templates.

Rendering on the server

SSR is supported by Next js; no setup is necessary to make this happen. On the other hand, React does not by default support server-side rendering, however it is possible with a little more work.

Because of its popularity, we may claim that React is the victor in this case. It might not be as difficult to find React developers for your web development or software project.

Although Next.js is a well-liked framework for creating online apps, it might be challenging to get programmers with expertise with the platform. This is due to the fact that Next.js is a very young technology and has only lately become widely used.

It is crucial to take into account the particular requirements of the project or issue you are attempting to solve while choosing between React and Next.js for a project.

While React is a fantastic all-purpose solution, Next.js has distinct benefits for particular project types.

For instance, Next.js might be a suitable option if you’re creating a static website or an application that doesn’t need complicated routing because it automates many development steps and has built-in support for server-side rendering.

React, on the other hand, could be a better choice if you’re working on a big project that needs dynamic routing and a lot of data-driven components.

Next.js vs React, there is ultimately no clear “winner”—it all depends on the specific needs of your project.

These Next.js features should be considered benefits rather than drawbacks. According to developer experience, all tools have some features that are more or less user-friendly, and these two need to be considered:

Routing – The Next js routing system is essentially a file system, which is insufficient for some projects. Developers must be proficient in using Node.js because it is the tool needed to create dynamic routes.

Network- The community is modest but expanding as Next.js becomes one of the most popular online building pieces. Compared to React or other frameworks, Next.js has less specialists, but it is unquestionably not a new technology. There are chances for developers wishing to stand out in the field of cutting-edge application development as the skill pool and demand for Next.js developers both grow.

Consider that you want to create applications that are quick, incredibly customizable, simple to edit, and have enhanced SEO capabilities. If so, Next.js is a tool to take into consideration, especially if your development team already uses React and is willing to incorporate a new tool into their workflow.

React is a library with a focus on user interface development, therefore it requires additional tools to realize its full potential.

Its short development cycles cause the documentation that is supplied to quickly go out of date. Strong community support provides rapid responses to any queries or concerns, but it also necessitates ongoing feature re-education.

A framework is necessary for React to reach its full potential. One of the most potent frameworks for creating applications with React is Next.js.

Which is superior? Though it’s a fantastic question, that one is incorrect. It depends on your needs, the cost, and several other development criteria if you should use a framework to build web apps. Both of these cutting-edge technologies provide you the greatest development experience. The greatest server-side rendering (SSR) and static site development experiences can be had by using Next.js, which also makes managing your web apps with a variety of tools simple. React is a more flexible framework because it is a library rather than a framework, and it might be a wonderful one for creating single-page web apps like UI, etc.

Contact Gold Crown Labs if you’re still uncertain about Next js vs react js: which option to make.

How Long Does It Take to Create a Website?

How to grow home remodeling business online in 2022